One would anticipate finding the most beneficial and securing product for health in a world full of chemically hazardous substances. Silver is a well-known all-natural active element that has been used for fighting germs and preventing infections for centuries. Due to its simplicity of use and wide commercial availability, the nano version of this material is growing in popularity.

Despite many assertions to the contrary, colloidal silver and ionic silver are typically the two types of silver used in supplements. Both ionic silver solutions (dissolved atomic silver) and colloidal silver (a suspension of metallic silver in a liquid) have gained popularity due to the antibacterial properties the metal. But the difference between these forms is not understood enough by the public. Both forms are highly effective in their antibacterial, antiviral, and antifungal actions.

WHAT IS COLLOIDAL SILVER?

Metallic silver nanoparticles suspended in a solution usually water is referred to as colloidal silver. Here the particles do not combine with other elements. Genuine colloidal silver always has a steadfast yellow hue. Its color becomes darker as it gets more concentrated. A high-quality colloidal silver solution often has a light golden tint that becomes yellow-brown at low concentrations. At higher concentrations and with increase in particle size is the reason for the yellowish tint. Color does not affect the safety of the products.

WHAT IS IONIC SILVER? 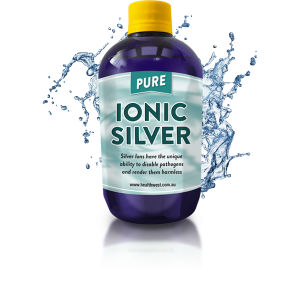 Ionic silver solutions predominate in many items that advertise themselves as colloidal silver or angstrom size silver particle colloids. The two names “colloidal silver” and “ionic silver” are in fact used synonymously. Other names are also used such to describe the products – m Monatomic silver, silver hydrosol, covalent silver and silver water are a few of the terms currently in vogue.

In a layman’s term, ionic silver is a solution consisting of water and silver ions (dissolved silver). But this solution does not contain any silver particles as the solubility of silver ions is due to the missing electron. That means it can pass through a membrane without leaving any residue behind. The physical features of a substance are determined by the outermost electrons of an atom. A silver atom becomes a silver ion when one of its electrons is removed. Be informed that ionic silver is not the same as metallic silver, silver particles or colloidal silver.(Read More)

IONIC SILVER TOXICITY AND SIDE EFFECTS

The problem with ionic silver is that it instantly interacts with about anything, including the stomach acid, proteins, and cell components immediately after entering the body. Because of this reaction, silver ions in the solution can ‘steal’ an extra electron from body cells. They become bound and neutralized in a very high proportion. Aside stealing electrons to be complete, silver ions also have the ability to donate electrons. It means that the ionic silver solution can combine with your bodily proteins and fat cells. 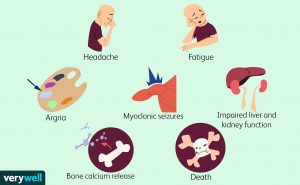 Ionic silver does not pose a safety concern due to their high reactivity and the unstable silver ions. However, research has revealed several major seemingly scary side effects of taking chemical silver compounds. These can result in irritation and burns of internal organs, tissues, and mucous membranes. They also lead to ulcerative formations on the mucous membrane of the digestive system and argyria. Argyria is rare a disorder caused by the massive build-up of silver compounds in the human body. This is achieved by way of prolonged ingestion of products containing chemical silver compounds (and not ionic colloidal silver) or after massive ingestion of home-made colloidal silver made with impure tap water.

Owing to this huge consumption, the skin and the internal organs trap the silver ions or big home-made particles, giving the skin a grayish-blue color. While Argyria does NOT pose a health risk, it is a cause of cosmetic concern since it is irreversible.

Further differences between colloidal silver and ionic silver other than their composition:

The silver in ionic silver is somewhat less effective because of its capacity to form compounds. Studies show that colloidal silver works well when ingested orally and administered topically.

The microscopic silver particles in colloidal silver are more stable than silver ions and play a crucial role in colloidal silver solutions. They are not metabolized by the body like they are in ionic silver, which makes it easy for the body to excrete them. As a result, you do not have to worry about silver particles accumulating in your body. There is also a zero risk of getting argyria when you take colloidal silver compared to ionic silver. There might not seem to be much of a difference between these two forms of silver to individuals who are not familiar with the nuances of silver compositions. In truth, there is a only slight difference.

Which form of silver is the most potent?

Colloidal silver and ionic colloidal silver are the most efficient from effectiveness standpoint. It is the preferred choice since there are no chances of silver building up in the body and causing argyria or other health issues, as is with chemical silver compounds. To ensure they are quickly absorbed by the body and are more effective, all silver solutions should contain nano-sized silver particles. Additionally, the sizes make it simple for the body to get rid of these particles.

How can you tell if a manufacturer is trustworthy and genuine?

Do you want to know where to buy true colloidal silver?  You can identify a genuine manufacturer based on the experience, technology, and expertise behind their product. One of the few colloidal manufacturers that combine top-tier knowledge, experience, innovation, and sound science in the development of their product is Naturistic Health Ltd.